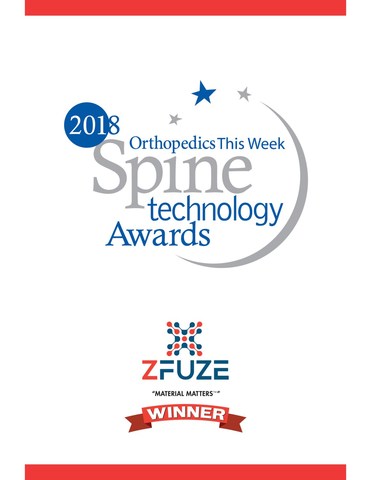 Orthopedics This Week annually recognizes the engineering teams and inventors who develop and successfully translate innovative products into clinical use to treat spinal disorders. The winning technologies this year were selected based on creativity, innovation, the capacity to solve a critical clinical problem as well as their potential long-term impact on improving spine surgery.

While Porous metal and porous metal-coated PEEK implants have been used for some time in spine fusion applications, ZFUZE stands out as the first and only bona-fide new biomaterial. Because it has a negative charged, micro-porous, hydrophilic surface instead of an inert hydrophobic surface, ZFUZE is able to provide a bone implant interface that supports bony ingrowth while retaining the mechanical properties and imaging capabilities of traditional PEEK.  “ZFUZE is a new biomaterial capable of being injection molded, 3D printed or machined.  Surface treatments, such as laser etching and nano-surfacing can be imbued to the material in any form,” added Derrick Johns Founder and CEO of DiFusion, “thereby giving the ZFUZE platform a broad range of clinical and financial advantages for potential strategic partners.”

ZFUZE was considered a viable recipient of this year’s Spine Technology Award due to the extensive animal research presented on ZFUZE Composite PEEK. The new biomaterial’s immunochemistry showed a statistically significant drop of Interleukin 1-Beta (IL1-B) Cytokines (well-known markers for fibrosis) and increased in vivo bone response, which will be presented the North American Spine Society meeting on September 27th in Los Angeles. The studies were performed by researchers at the Neuroscience Institute at the Allegheny Medical Center. Results of the studies show that ZFUZE microporous PEEK composite elicits an elevated in vivo osteogenic response while simultaneously reducing the fibrotic immune response when compared with inert hydrophobic PEEK.

“This is the first biomaterial we have independently tested that was engineered for a decreased immune system response.   This novel approach to rethinking the material response resulted in less fibrosis and a greater degree of osseointegration we have not seen in other new biomaterials to date,” Boyle Cheng, PhD., Director Neuroscience Institute at the Allegheny Medical Center.

ZFUZE biomaterial will be submitted to FDA in early October 2018.

ZFUZE and MATERIALS MATTER are registered trademarks of DiFusion Inc. 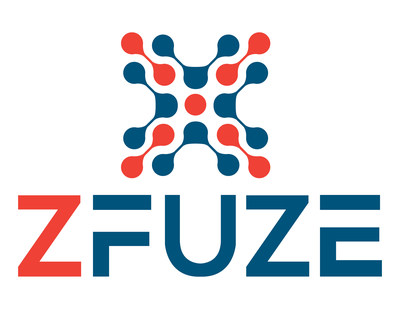