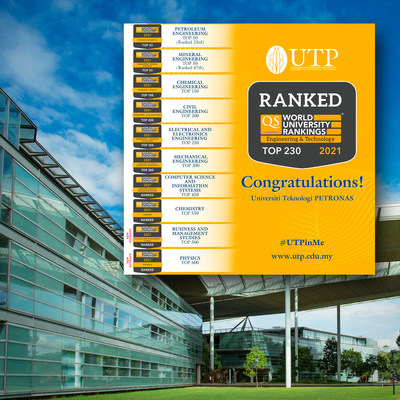 The university’s Petroleum Engineering and Mineral Engineering subjects have maintained their Top 50 position in the rankings, placing at 23rd and 47th, respectively. With these rankings, UTP has retained its standing as the top university in the nation for both subjects for the second year in a row.

“We are pleased with the progress we made in the rankings. This achievement is a recognition of UTP’s academic programme quality, expertise and strengths as an industry-focused higher education institution in the vital industry-relevant areas, such as engineering, technology, natural sciences, social sciences and management,” said UTP Deputy Vice-Chancellor Academic Professor Ir Dr Hilmi Mukhtar.

“We wish to thank the faculty members, staff, students, our partners, and collaborators as well as PETRONAS for their laudable contribution in this achievement. This is indeed a shared success as UTP has been persistent in ensuring focused execution in realising its vision and mission of becoming a leader in technology education and centre for creativity and innovation, ” he added.

For more information on UTP, visit www.utp.edu.my or follow us on our social media at UTPOfficial.